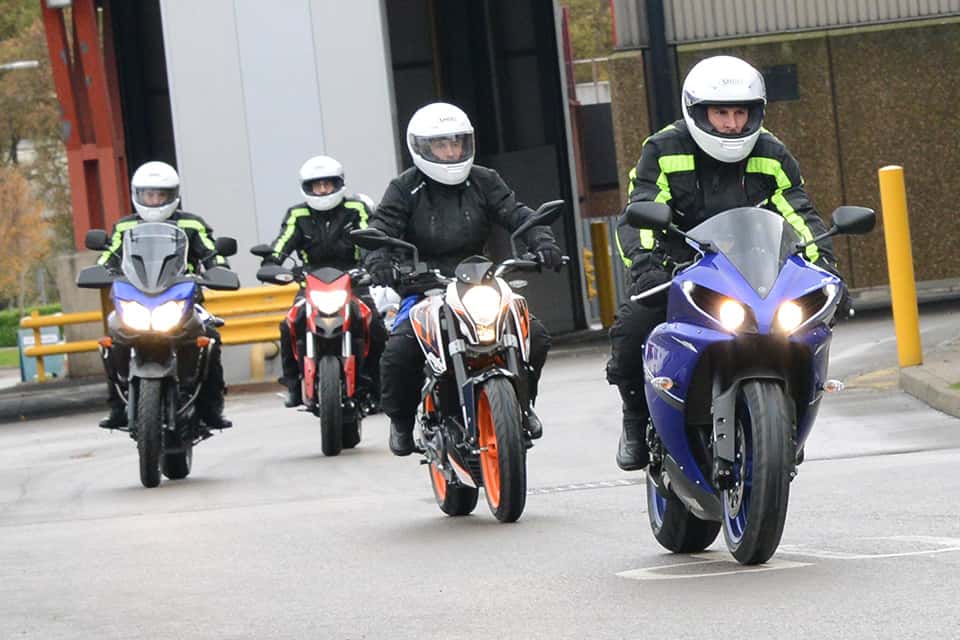 Motorcycling is often a solitary pleasure; so riding in groups can offer something outside of the norm. While it can be fun to ride with others, riding in groups does require a degree of discipline and planning.

It’s important to recognize that not everyone is of the same riding experience and ability. Additionally, not all riders enjoy the same style of riding. Problems can occur when slower riders try to ride outside of their limits in order to keep up with the group.

That doesn’t mean that you should only stick to groups of similar riding abilities, but it does mean that that you should prepare for this scenario. Hold a briefing before you set off and make sure everyone agrees the route and those that want to ride on ahead know where to stop to allow the group to catch up.

The ideal group size is around five to seven riders. You’ll often find that larger groups naturally break down into smaller groups as the ride goes on.

In small groups of three or four riders, there is often no need for an organised structure as long as you know where you’re going and can communicate with each other should someone get lost.

In larger groups however organization is the key to a successful group ride.

Assign a group leader, a tail rider, and a marker. These should be experienced riders used to riding in groups.  In larger groups there will always be some riders who want to blast off ahead of everyone else. Let them. While the leader’s job is to keep the group together, in mixed groups it’s best to let those who want to ride off ahead to do so, rather than have them getting frustrated riding at a slower pace. If you’ve pre arranged fuel stops and meeting points, they won’t get far anyway.

On any route there usually deviations from the obvious ‘straight ahead’ route. It’s the markers job to pull over in a safe location at there deviations and point the group in the right direction. Once everyone has passed through, the marker should then rejoin the group ahead of the tail rider. The role of the marker is one that can be shared across the group. Usually whoever is first behind the leader at the time of the deviation will assign themselves the marker.

The tail rider’s job is to watch the group ahead, and keep an eye out for those that might be riding inappropriately or outside of their capabilities. If a rider in the group is signaling for others to take over, that should be a clear sign to the tail rider that the pace of the group is too fast. The tail rider should work in conjunction with the lead rider to address any issues.

When riding with other motorcycles it’s best practice to adopt a staggered formation to keep the group form getting too strung out. Essentially one rider rides on the left-hand side of his lane, and the next ride on the right-hand side of his, ensuring at least a one second gap.

Where visibility is poor, or on especially twisty roads, it’s better to ride in single file to give yourself as much room to maneuver as possible.

Getting separated from the group

A red light here, or a busy junction there, and it’s all too easy to get separated from the group. If that happens the first thing is not to panic. If you’ve assigned a tail rider he’ll be behind you, unless you took a wrong turn, in which case he would have seen it happen, and will be able to find you.

The important thing is not to ride outside of your comfort zone, and not to speed in order to catch the group up, they’ll be waiting for you at the next stop, and the marker will be waiting at an deviations in the route.

Looking after the group

The lead ride and the tail rider should carry mobile phones and have each other’s contact information incase of problems. At least one rider in the group, preferably more, should carry a first aid kit, and there should be a well made up toolkit between the group in case of mechanical issues.

How to stay warm on your motorbike this winter

What to do in the event of an accident

Learning to ride off road

Riding abroad for the first time