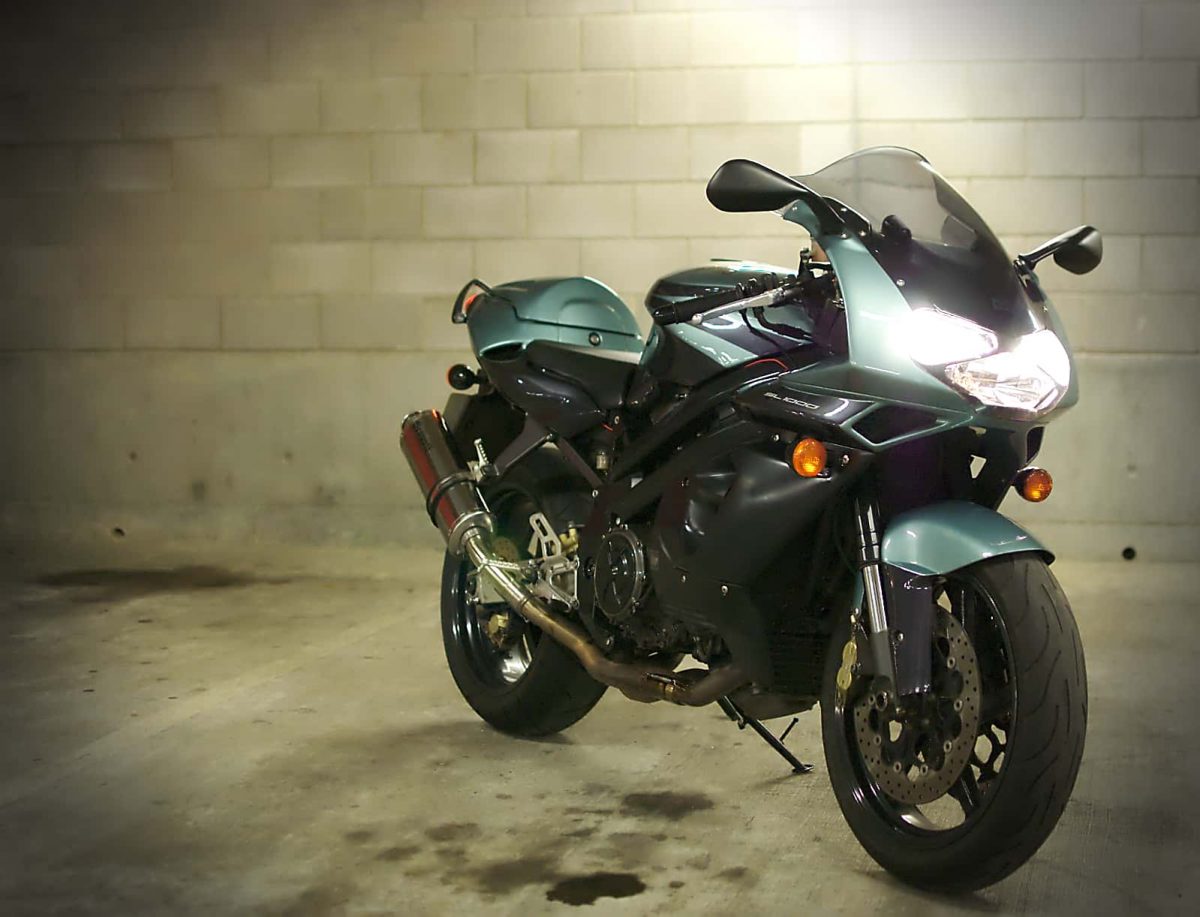 Which Motorcycle Headlight Bulbs Are the Best? An Independent Test

We know that it can often be difficult choosing the correct headlight bulbs for your motorbike, or motorcycle, especially when many of the manufacturers’ claims are misleading at best, and sometimes a downright lie. Sshh you didn’t hear that from us ok?

So just how can you be confident in choosing the best bulbs for your needs? What can you use to guide your decision? Well back in 2010 ‘Ride Magazine’ published a three page spread in which they put the most popular motorcycle headlight bulbs at the time through their paces in a independent test. The results clearly showed that not all motorcycle bulbs are created equally. Many, of the aftermarket bulbs outperformed their OEM equivalents, some by quite a margin.

The type of fitting also had an affect, as the best bulbs in one fitting category were not necessarily the best in another. The bulbs were tested using a machine called a goniometer. A headlight unit was mounted to it and shone straight at the wall from a carefully calibrated distance.

A representation of a road was painted onto the wall and sensors attached to measure the intensity of light, and to calculate the spread of illumination generated by each bulb. That test is a good few years old now, but many of its findings still hold true today, as most of the products tested are still on sale. 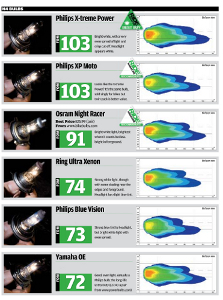 The test results were split into categories representing the fitting attachment of the bulb. The bulbs were ranked on their “figure of merit” (FOM), which is a compound measurement sampled from from three major points on the road. An FOM rating difference of 30 units equates to an extra 8-9 meters further visibility down the road. The outright winner in both H4, and H7 categories was the Philips X-treme Power bulb, with an FOM rating of 103, compared to stock OEM bulb, in this case from a FZ1 Fazer that produced an FOM of just 72. The Philips X-treme Power bulb was described as;

“Bright white with a very even spread of light and crisp cut-off.”

“Bright white light, brightest where it counts but less bright in the foreground.”

All other H4 bulbs tested fell below the 75 FOM mark. Halfords own brand bulbs scored particularly poorly, some scoring less than 50 FOM. In H7 guise the Philips X-treme Power (now replaced by the improved X-treme Vision), scored 149 FOM points, gaining the coveted Ride Magazine Best Buy Award. The Philips MotoVision was second with 139 points, and the Bosch Plus 90 third with 121 points. The Osram Night Racer came fourth in H7 format, with a score of 113.

H7 OEM bulbs scored as poorly as their H4 counterparts, with Kawasaki part scoring 83 points, and BMW scoring 79, a massive 70 points off the best performing bulb. Although the test is now over two years old, it is still the main, and probably only published independent test motorcycle bulbs in recent times. While some of the products tests have been replaced by improved models or new technology (see the Ring Automotive Xenon Ultima +120%). Many of those present in the test are still on the market today. Until such time as any new research comes to light, this remains the most extensive test of motorcycle headlight bulbs available.

5 best motorcycles for women. (There’s not 5, nor are they solely for women)